It seems that Asian food has been a theme with my meals lately, but it’s just so convenient to whip up a stir-fry in a hurry. As much as I wanted to use loads of vegetables in this recipe I restrained and just used a few and it came out absolutely delicious. So enjoy! 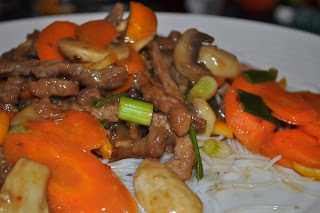 To start:
Start by sprinkling the corn starch over the beef and completely covering it with the corn starch, place in the fridge while you gather your other ingredients.
Peel and slice the carrots, spring onions and mushrooms. Set Aside.

Make the sauce:
With a sharp knife, carve around the orange and get all the orange rind off without getting the white part. Slice into tiny strips and add to a bowl
Next add to a bowl the juice of the entire orange.
To that add the honey, fish sauce, soy sauce, water, beef stock cube, and garlic puree and mix well to incorporate.

To cook:
In a large skillet heat oil until hot.
Add the beef and fry till half of the meat is browned, making sure to separate your strips well.
Then add the carrots and spring onions. Saute for a further 5 minutes until the beef is caramelizing and turning golden.
Next add the mushrooms, continue for about 3-5 more minutes.
Add the sauce and stir, to incorporate.
If it begins to thicken up too much add a little extra water to thin it out.
Serve over rice or vermicelli noodles.
Posted by Gina at Thursday, September 29, 2011 No comments:

Colors of the Rainbow Chicken Stir-Fry

This is the stir fry I accompanied with my light stir fried rice. The ingredients are objective and you can use whatever you have. The sauce as well, it’s just a guide to help creativity. I do use a lot of ingredients but I happen to buy a lot of ingredients that all build up flavour to make things taste delicious. I’ve attached photos of the veg I used as well as for the sauce so that anyone can see what goes in. This is also great vegetarian. So here goes! 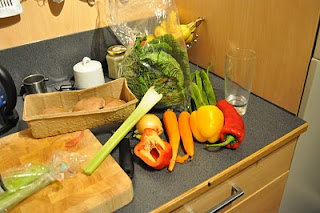 To Start:
Blend all the seasonings and spices together for the sauce and let sit.
Slice the onion, peppers, celery, ginger, carrot, mushroom, cabbage into whatever sizes you like and set aside.
Slice chicken breasts in small slices for fast cooking, set aside. 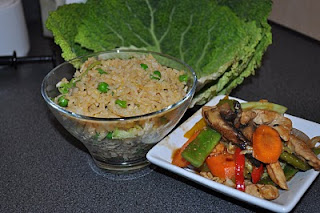 To cook:
Heat the oil in a large skillet or wok, when hot add the chicken and fry till almost cooked through.
Next add all of the vegetables and stir fry in the pan till about 50% soft.
Add the sauce over the veg, if it begins to thicken too much add some extra water.
Cook for 5 minutes and serve over egg fried rice!

Posted by Gina at Wednesday, September 28, 2011 No comments:

Moussaka is a dish found in many Mediterranean areas including Greece, and I’ve only eaten it at Greek restaurants. I have always wanted to try to make it, and in this case I replaced the traditional aubergine with only courgettes, because it’s what I had at the time, and this came out to be a really lovely meal accompanied by peas, but I do think some roast potatoes would go along nicely. It freezes well. Or serves 4. 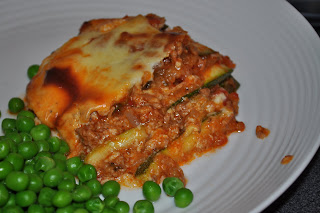 To Start:
With a sharp knife ), slice the courgette lengthwise as thin as you can get (if you’re not sure do thin round slices).
Place the courgettes in a colander and salt liberally so moisture is released.
Dice onion and garlic, set aside.

To Cook:
In a large pan, sauté the mince lamb with the onion, garlic, basil, cinnamon and oregano.
When completely brown, try to lean the pan out and spoon some of the grease into the bin.
After most of the grease is gone add the canned tomatoes and 1 tbsp. flour.
Stew for 10-15 minutes on medium heat.

To Make the White sauce (with packet):
While the mince is cooking, follow directions on the white sauce packet, see below for cream sauce from scratch.
When the white sauce has come together and thickened, add 1 egg yolk and half of the grated cheese.
Set aside.

To Assemble:
After draining some of the liquid off the zucchini, rinse thoroughly and pat dry to remove salt.
In a shallow casserole dish or baking pan, begin layering the zucchini with the mince lamb mixture until both the courgettes and lamb mixture are used up.
Make sure to layer to leave ½ at the top of the dish.
Carefully pour the white sauce over the top of the casserole.
Sprinkle with the remaining cheese.
Cook in a 170C (350F) oven for 45 minutes or until golden brown on top. 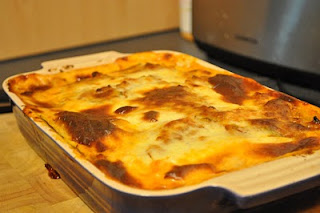 White Sauce topping: (If no packet)
Melt butter in a pan.
Add the flour and mix thoroughly until a paste.
Move that paste around in the pan for 1-2 minutes on a low-medium heat just to get some of the flour flavor off.
Slowly add 300ml (~1 ½ c milk), and stir with a whisk to ensure no lumps (may need a bit more milk to thin it out).
When thickened add half the cheese and yolk.
Continue with the recipe above.

Addendum: I have since revised this recipe with potatoes on May 7, 2014 Moussaka with Courgettes and Potatoes
Posted by Gina at Tuesday, September 27, 2011 5 comments:

Of course this isn’t the normal heavy heavy fried rice you typically think about when you think "fried rice", but I was making a stir-fry and wanted something a little more exciting to accompany it besides the boring old plain rice. Enjoy this, I will post another delicious stir-fry soon. 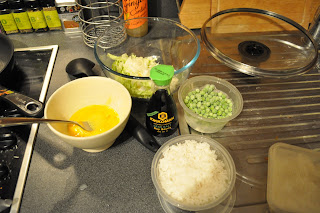 Note: It’s good to cook the rice the day before, or use leftover white rice. The firmer texture holds up better during the refrying process. 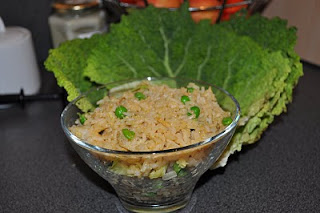 To Start:
Dice onion very fine, along with cabbage if you’re using it. Set aside.
Lightly beat your egg in a separate bowl.

To Cook:
Heat oil in a large pan until hot.
Add the onions, cabbage, peas and dried ginger. Sauté about 3-5 minutes until onions are soft.
Add the rice; flatten out in the pan to get a good sear.
Add the soy sauce and the egg and mix to incorporate thoroughly.

Enjoy this on its own as a main meal adding shrimp or leftover chicken, or as a side to a stir-fry.
Posted by Gina at Wednesday, September 21, 2011 3 comments:

I just threw together this recipe because I had some pork mince in the freezer as well as some leftover marinara sauce. It’s a very simple meal to cook with very easy clean-up, low in calories when prepared with the right mince. Enjoy! 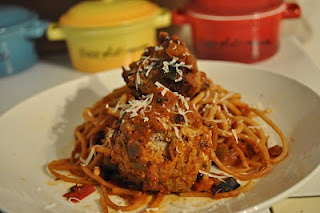 To start:
Dice green pepper, and onion and put into a medium bowl.
Add the mince, bread crumbs, egg, and seasonings; mix well.

To cook:
Preheat the oven to ~170C (350F).
Spray with oil a muffin tin with at least 12 cups in it.
Roll the meat mixture in to balls and drop one in each cup.
Continue until mixture is finished.
Place in the oven and cook for 30-45minutes.
Serve over pasta with your favourite sauce, or add into a sandwich, the possibilities are endless.
Posted by Gina at Monday, September 19, 2011 No comments:

Well, I know I love fried chicken. The crispy skin and the juicy flesh melting in your mouth…I have been craving a delicious piece lately and I wanted to tighten up the recipe and thin it down so it’s not pouring with grease. Not much preparation in this, just batter and pop in the oven for one hour. Enjoy! 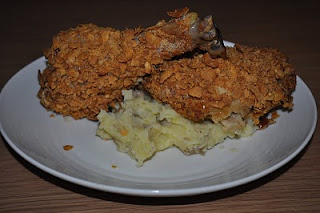 To Start:
Set out two bowls; in one bowl mix together milk, egg, flour, spices and blend together until smooth.
In the other bowl, crush cornflakes and add salt and pepper.

To cook:
Preheat your oven to about 170F (350C)
Line a cookie sheet with foil.
Dip your chicken in the flour and egg mixture and let drip to take off some of the excess, next roll in the corn flakes and set on the cookie sheet. Repeat this with the remaining chicken.
Bake for about 1 hr. Poke with a fork to make sure the juices are running clear.

If you want to be true to the south, you should serve with smashed potatoes and corn on the cob. Enjoy!

Back home I used to get cans of stewed tomatoes, and I miss them, there’s only a slight difference between regular canned tomatoes and the stewed. They are stewed with peppers, celery and onions. It makes it convenient to add extra level of flavour without doing anything yourself! I remember I used to always heat up a can and then add a bag of frozen okra. I’ve tried to recreate it and it’s a great side dish or would be a great main dish if you add chicken or prawns, over rice. Enjoy. 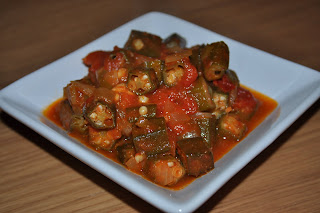 To finish:
Add the tomatoes, okra, stock cube, and seasonings.
Cover and let stew down for about 15-20 minutes.

Serve hot, over rice, or as a side dish to any main.
Posted by Gina at Tuesday, September 13, 2011 No comments: