This is a recipe re-vamp. Some of my recipes I haven’t revisited in ages! Sometimes it’s good to go back and check to see if they actually work! He he! This one actually does, and it’s absolutely fantastic. In the original recipe Lamb Moussaka with Courgettes, I made it without potatoes for a low-carb meal. It works really well with courgettes but there’s no real benefit of courgette over aubergine, it’s just a change and something a bit different. Something I used to do then in the original recipe is the white sauce from a packet. Even though my cooking has grown so much today and I’m so used to doing everything homemade I stuck to the recipe and I made it with the white sauce packet. It really works! Pat on the back for me, and I will definitely use it as a shortcut in the future. The recipe has changed ever so slightly because I could only get hold of 400g of lamb mince (almost 1lb), and I weighed most of my ingredients to make it right. Enjoy, serves 4. 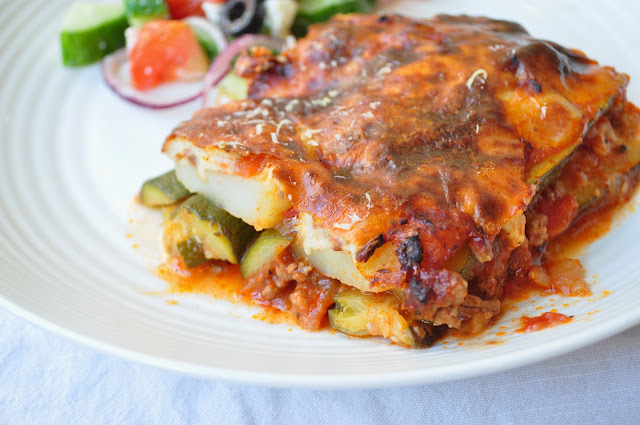 To start:
Slice the courgettes very thinly lengthwise and place in a colander.
Salt liberally and leave to drain.
Dice the onion and garlic and set aside.

For the Cooking:
In a large sauté pan (hopefully non-stick), heat and brown the lamb, rendering as much fat out as you possibly can. Tip the fat off into a disposable container; you can also use a paper towel to swirl around to get some of the fat out.
Next add the onions and garlic soften for a few minutes.
Salt and pepper to taste and sprinkle on the flour stir for 2 minutes cooking out the flour.
Next add the tinned tomatoes and half a can of water.
Bring to a rapid boil and then turn down and reduce for about 20 minutes until a thick paste.
While that’s cooking down par boil your potatoes, peel and slice into 1cm slices and boil for about 5-7 minutes; drain and set aside.

To Assemble:
Rinse the courgettes off and pat dry.
Pour a spoonful of the sauce at the bottom of a casserole dish.
Lay the courgettes down and top with sauce, repeat until there are no more courgettes.
When the courgettes are gone, use the potatoes, and put some sauce on top.
Make the white sauce according to package; when thick add the egg yolk and about ¾ of the cheese.
Very carefully pour the sauce over the top of the casserole, trying to keep the white sauce all on top.
Sprinkle with the remaining cheese.
Bake in an 180C (350F) oven for about 30-45minutes until the top is golden brown.