It’s no secret I love Moroccan food, but I wanted to try something I’ve gotten in a restaurant that I really enjoyed. This is called a Bastilla or Pastilla the words are used interchangeably in different cultures but mean the same packet of meat wrapped in filo dough. I don’t expect this is one of the most sought after dishes I make but it was really easy and really delicious! I’m only a bit bummed that I didn’t get a great photograph of the sliced product, but if you’re like me and you like the sweet and salty element in food then you’ll love this dish! It’s got lots of earthy notes to it. And the crunch of the filo pastry is so delicious. Try it for your family and see. I made a slightly more complex one where I added spinach and beans as a layer but you could easily just use the meat. Enjoy! 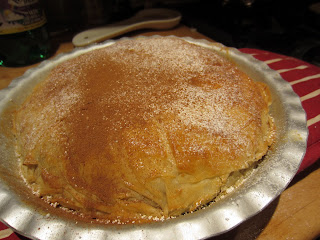 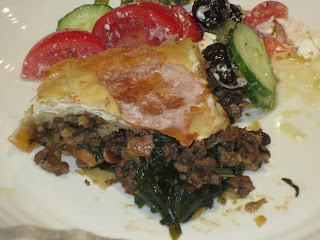 To start:
Chop onion, dates, sultanas, pistachios to about the same size.
Chop mint and coriander.
Chop onion for spinach, and set aside.

To Cook:
In a large sauté pan, start to brown your lamb, when brown add in the onions, dates, sultanas, pistachios, and spices, and cook down for a further 10-15 minutes.
Once cooked add the honey and herbs, mix thoroughly and turn off heat and set aside.

For the Spinach:
Saute the onion in hot oil for a few minutes then add the washed spinach and sauté until wilted, add the garlic clove and can of beans and stir to cook down.
Next add the tomato paste, lemon juice and spices.
Combine and set aside.

To Combine:
You will want to work very quickly with this dough and also be very careful as it’s fragile, so make sure you have your egg yolk and melted butter handy.
In a pie dish, fold each piece of filo dough in half and lay down around the bottom of the pie dish and also to cover sides, about 3-4 pieces.
Brush the entire area with melted butter.
Next lay down the spinach layer, try to make sure there’s no juice.
Cover with another piece of filo dough, and brush with butter.
Next add the lamb mixture and cover again with a folded piece of filo dough, brush with butter.
Next add all of the remaining filo dough on top and pull in all of the sides and tuck them under to make a packet.
Brush the top with butter and egg yolk.
Bake in a 175C oven for 20-30 minutes or until browned nicely.
When you remove from the oven sprinkle with powdered sugar and cinnamon.
Slice just like a pie and serve!
Posted by Gina at Friday, June 28, 2013