I have been thinking lately that it would be nice to have pumpkin cinnamon rolls. I absolutely adore good cinnamon rolls but they’re definitely few and far between here! I also know that it can be difficult to make the right dough for them. Putting my thinking cap on I thought why I don’t try to make some with some kind of premade dough! Enter; bread mix. I really think I’m on to something here guys; this is a fantastic shortcut that took ages off the time to cook these. Sure the texture is a tiny bit off from those big thick delicious buns from back home but this is all so much easier! The kicker here is that the pumpkin isn’t actually in the dough, I’ve made it so that it’s a spread in between the the rolls so you get it in every bite and I’m sure it’s a bit more prominent than if I had made it in the dough itself. I made my own apple butter for this recipe, because I had some laying around…but you could skip this all together and add ¼ c. more pumpkin and add ½ tsp. cinnamon, ¼ tsp. nutmeg and an eighth of a teaspoon of cloves to replicate the flavour. This makes 9 rolls and they are amaze! 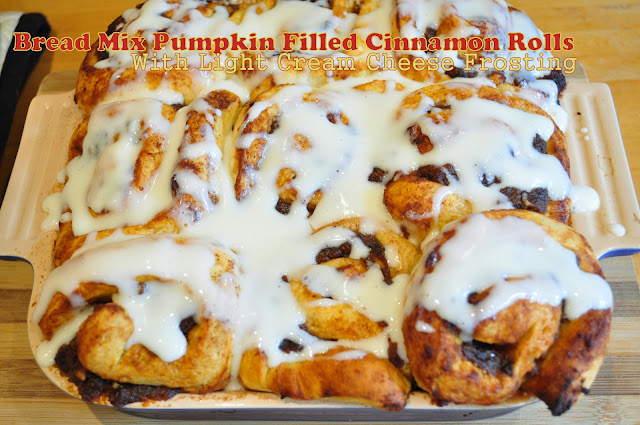 Follow the instructions on the bread mix.
While you’re waiting for it to rise in various stages, mix up the pumpkin, apple butter, walnuts, muscovado sugar in a paste.
When the bread mix requires to be put into a loaf pan, this is when you’ll flatten and stretch it out into a big square and get it as big as you can, about 12x12.

Spread the pumpkin mixture all over the stretched out dough and roll up.
Slice into 9 even slices and put into a square dish.
Set to prove for a further 30 minutes in very warm place.

To Bake:
Melt the butter and brush it all over the tops.
Sprinkle with cinnamon and drizzle with honey.
Bake in a 200C oven for about 20 minutes, check as times vary by oven. 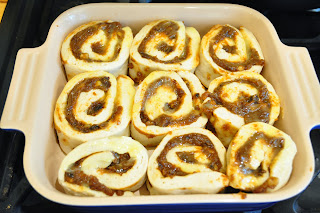 For the Icing:
Mix the Philadelphia cream cheese and sugar and milk very carefully until you’ve got a nice runny texture.
Make sure to sieve any lumps out or sieve the sugar before mixing it. 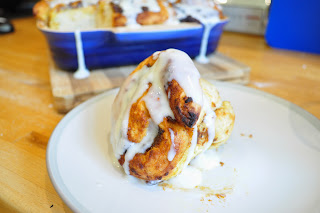 When the cinnamon rolls come out of the oven drizzle the icing all over the hot rolls and eat up!
Posted by Gina at Friday, September 26, 2014