Ok, so there's nothing gourmet about this dish. It's just a simple craving that I had and I know that this isn't even close to the real thing. Sometimes you just want junk on a Friday don't you? Back hom we have 'Taco Bell', I have't really been there in probably 10 years or so but sometimes I get a hankering for the idea of things. For this it was their 'Mexican Pizza', simply put a few tortillas with beans, grouned beef, some spices and cheese. I'm sure that this is utter garbage and will make your stomach churn with discomfort at the thought of the calories and nutrirtional value but I decided to do my own take on it. Obviously taking inspirations from all places sometimes leads to really good ideas!

Anyways, back to the recipe. For me, I decided to go with chicken on this one, and decided to take inspiration from my mom's chicken tacos, which I remember as a kid and really miss the flavour. I'm sure I can't recreate it near as good as I'm lacking in most of the spices, but you boil the chicken until well done, let it cool, debone it and then refry it with a bit of the water it poached in and some spices. Probably not the easiest dish I've ever made on a Friday as it was a bit time consuming with the chicken but if you wanted to do something else that's easier, like mince beef, or even precooked chicken that you buy, anything will work. I also mashed my own beans which makes a bit more work but I enjoy it anyways. So here's my Mexican Pizza as inspiration for a plethora of any other ideas you might have. This recipe serves two but could easily be made to suit your needs.

I started by boiling the chicken for about 45 minutes with onions, garlic salt and lots of pepper.
Take it out and cool it for about 30 minutes before deboning.
While all this is going on, open a tin of beans and drain until almost all the liquid is out.
Place in a small sauce pan and turn the heat on high and mash with a masher, adding the cumin and 1 tbsp of chilli powder.

You can add small spoonfuls of the chicken stock water if it gets too dry. If there is too much liquid just continue to slowly boil it off.
Cook these until a nice creamy consistancy and then turn off the heat.
For the chicken, when deboned place in a pan with a little bit of the broth, a freshly chopped onion and garlic and 1 tbsp of chilli powder.
Boil on high for about 10 minutes continuously adding the broth to keep the chicken hydrated.

To Assemble:
Fire up the grill to full blast and line a baking tray with foil. 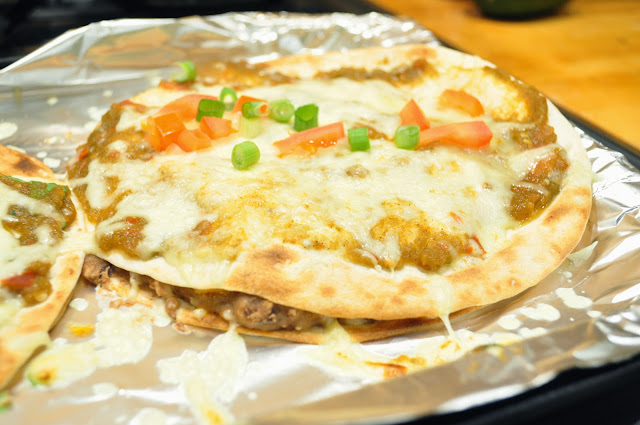