Stew and soup are one of the few things that are on my favourites list of food to make. However DH absolutely loves them so from time to time I indulge him and make him something. I wanted to make something that resembled something for St. Patricks day although I totally get that this is definitely something that really only Americans indulge in. What I've learned from living in the UK, is that there are the four countries within the United Kingdom that celebrate their own patron saint on different days of the year. In England there is St George on April 23. In Scotland it is St. Andrew on November 30, and in Wales there's St David on March 1. The only one that that anyone actually remembers, myself included is March 17, which is St. Patricks day which everyone remembers from having to wear a bit of green at school or else you were pinched. That is probably such an American tradition that has fallen on deaf eyes/ears here in the UK. While I'm sure there are some Irish festivities going on, I barely hear a peep.

With that said and enough of my really crap history lesson, I'm going to get on with my recipe that just happens to use Guinness in my weak attempt to pay my homage to the Saint. Like I said, I don't really like stew, but I do like a bit of Guinness, and there's nothing more Irish than Guinness and beef. This was incredibly easy as I cooked it in a slow cooker so it does all the work for you. There's a little bit of prep but once that is finished there's not much left to do other than sit and leave it to cook. You could absolutely do this in a cast iron cassarole dish and set it in the oven to forget but I'd much rather forget it in the slow cooker, I'm pretty sure it uses less electricity. I fully recommend getting yourself a higher welfare piece of meat. In my opinion it's just not worth it to eat meat unless you're giving the animal a piece of what it deserves, a better life and a better slaughter. Ok off my soap box. And to the recipe...this recipe will serve at least 6 and stretched to 8 if you have some extra sides and more bread.

OH THE BREAD.. I almost forgot. So I decided to use a traditional BBC Recipe for soda bread by James Martin, but I wanted to add some roasted garlic and rosemary to just give it some extra flavour. The recipe is as follows exactly from the BBC Website with my additions. Enjoy!
Ingredients for the Stew:
1kg slow cooking beef, like brisket or hind quarter
1 large carrot
1 parsnip
1-2 onions
2-3 cloves garlic
1 200g turnip
400g potatoes
100g flour (in half)
1 pint of Guinness
500ml of beef stock
2 tsp. Sunflower oil
salt and pepper

Cut the meat in large chunks if not already, toss in salt pepper, and then in half of the flour to coat completely.
In a large skillet heat the oil and then toss in the meat to brown on each side.
Begin to peel the carrots, turnip and parsnip and cut up the onion in chunks.
Add all of the vegetables including garlic to the browning meat, and turn up the fire to full wack.
Add in the can of Guinness and bring to a rolling boil for 5 minutes.

Next add in the stock and bring to a boil.
Transfer to a crock pot on high heat for about 4hrs.
At the end of four hours, go ahead and add the remaining 50g of flour with a little stock or water until it forms a thick paste, trickle in teaspoon at a time until the desired consistancy of stew is achieved.

**Note: In the photo of ingredients, there's wine and pearl barley. I opted not to use these… 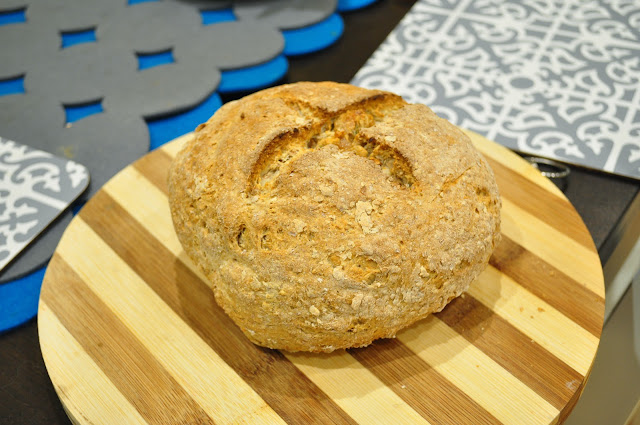 For the Garlic:
roast a whole head of garlic chopped in half drizzled with olive oil wrapped in tin foil for about 45 minutes at 200C.
Chop your rosemary.

Bread:
When you're ready for the bread heat the oven to 200C.
Stir together flours, salt and bicarb soda in a large mixing bowl and mix well.
Next squeeze out the roasted garlic which is like a paste into the flour as well as the rosemary.
Next pour in all the buttermilk and mixuntil a soft dough is formed.
Shape into a round ball and cut a cross on top and place on a lightly floured surface and bake for about 30 minutes or until hollow sound inside.
Posted by Gina at Tuesday, March 17, 2015