Normally I wake up on a weekend wanting breakfast tacos, but not this past Saturday, all I could think about was pancakes with some lovely blueberry syrup. Turns out I had the blueberries in the freezer, all there was to do was whip it all up for an easy breakfast! This made four exactly and served two, but can easily be doubled. Also, from experience, I would start the pancakes first then work on the sauce while the pancakes are going! Enjoy! 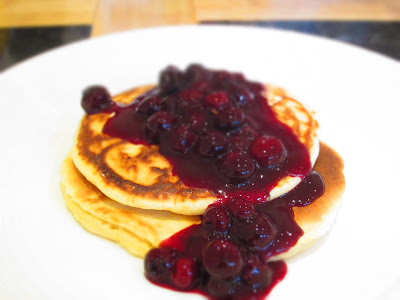 To start:
Mix up the flour, egg, baking powdering milk and ½ tsp. sugar in a bowl.
In a cast iron skillet, heat a tiny bit of oil and rub it all over the pan with a paper towel.
When it’s hot about 5 minutes, pour on the first pancake, turn the heat to med-low and leave it alone for about 4-5 minutes or until you start to see air bubbles on the top.
Flip, and wait a further couple of minutes until nice and golden on the other side.

Meanwhile:
As the pancakes are cooking, throw the blueberries, orange juice, water, cinnamon and 2 tbsp. sugar and melted butter into a small saucepan.
Bring to a boil and simmer for 10 minutes or until a thick lovely syrup has formed.
When the pancakes are done, butter them up and pour the blueberry sauce on top!