For those of you that don’t know what fideo is, it’s a Spanish word for ‘noodle’, but it’s often used to describe one type of noodle dish in Mexican cuisine. Sometimes you’ll find it as a soup called sopa de fideo, but my mom usually just made a thicker version without the soup. I absolutely love to make this, and I was ecstatic when I found vermicelli nests! It’s basically the exact same stuff you would get in a local grocery store back home, except they’re longer and swirled into nests instead of small straight noodles. These noodles cook super fast which makes them a great choice for a quick weeknight meal. This is also wonderful as a vegetarian option without the meat. I hope you give it a try! This serves 3. 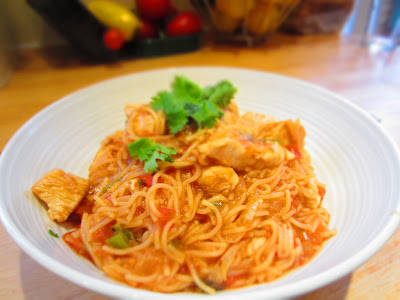 To start:
Dice onion and pepper.
Heat up your stock to have ready.

To cook:
In a shallow sauté pan, heat the oil and fry together the onions, pepper and turkey meat. About 5-6 min.
When the turkey is nearly done and browned on all sides, crush up the vermicelli nests and drop in the pan and stir to combine. (The point is to toast up the noodles)
Next add the cumin.
Stir thoroughly for another 5 minutes.
Next add the tin of tomatoes, coriander and the hot stock 1 cup at a time. Stir thoroughly, and bring to a boil, then turn down to simmer.
Cover for a further 5 minutes or until noodles are soft.
Posted by Gina at Thursday, August 15, 2013